We have experienced, highly qualified, and discreet professionals, with excellent references and a broad range of project training, available to help.

Wrote a book on low power FM stations, for aspiring owners, in 2002.  Sold around 50 copies to applicants on file, with a very limited direct mail campaign.

Over 250 copies of this eBook have been sold to LPFM applicants and new licensees, as of 12/2018 Including churches, schools, colleges and universities, state and local government entities and other groups.

Low powers now have regular type call letters like K J J J. The station broadcast music videos to start with, mainly aimed at the Univ of NE students who lived on campus. The University hadn't allowed Cablevision onto the campus, so the kids only had the major networks, 1 independent station (KPTM) and 61TV. (No Dish or Directv back then.) Programming started to include live sports feeds (football/basketball), classic movies, etc. An independent survey found that Ch. 61 had as many viewers as the #1 radio station had listeners. most times of the day. Back then, Nielsen refused to even list low powers, even if they had a sizable audience. The reason was never explained. They now do carry them, if they qualify with a large enough audience.

The station started with a classic rock format, with classical music on Sundays from 6am -Noon. Quickly we added sports from the local team, the Aurora Huskies, the other schools in the county, Legion Baseball, and Univ. of NE sports. The format changed to country after awhile, then back to classic rock, and ended with a blues/rock format. One week before Christmas the station always went total Christmas music, with hours sponsored. Sports airtime was sold to a contract broadcaster, after the first 2 years, but the station did do it originally. Was the origination station for a 4 station network, set up to broadcast the basketball championships from Aurora a couple of times. No automation until last 1 1/2 yrs. All but one DJ trained on-the-air. About 10 total. Sold 1985.

honor descriptionI had a rock 'n roll station in the state, (KIAE-FM Aurora, NE), that aired their public service ads. A lot of rock music stations across the country didn't air military ads, at that time. Apparently, the station did get a few to sign up, at a time when service in the Guard was quite different, than it is now. They gave me this award yearly, a nice token of appreciation.

honor descriptionward yearly, a nice token of appreciation.I had a rock 'n roll station in the state, (KIAE-FM Aurora, NE), that aired their public service ads. A lot of R&R stations across the country didn't air military ads, at that time. Apparently, the station did get a few to sign up, at a time when service in the Guard was quite different, than it is now. They gave me this a

"How To Apply For, Build and Operate a Low Power FM Radio Station" by Stephen Kafka

The book was available on Ebay, from Harlan's Warehouse, Harlan Jacobsen owner. It gives a how-to on the process, with a detailed look at how to make money with the station, to pay for itself, a manager and small staff.  It includes a copy of the FCC rules and regulations. It was initially sold thru a limited direct mail campaign, to then current applicants, and later, downloadable online.  Sold approx. 50 copies.

Over 250 copies of this eBook have been sold to LPFM applicants and new licensees, as of 12/2018. Including churches, schools, colleges and universities, state and local government entities and other groups.

To order a newly revised version of the eBook on PDF (16MB), ePub or MOBI (Kindle), from SGK Publishing, look below. Unabridged, and abridged.

This eBook, in english and spanish, is
available on MOBI (Kindle) from Amazon, and in
english, ePub, from Smashwords.
"How To Start A Low Power FM Radio Station"
(Abridged)  is now available at Apple Books,
Barnes & Noble/NOOK, KOBO, Tolino, Vivlio,
Payloadz and Smashwords.

You can trust that your business and personal matters will be handled with professionalism, integrity, and the utmost discretion. The end result will be accurate, on time, and get you great results.

Your radio or TV station project will be handled expediently, ranging from, for example, acquiring the rights to tower sites, to filing all necessary FCC paperwork for all minor and major engineering changes, to full licensing.

"How To Start A Low Power FM Radio Station"

"How To Apply For, Build and Operate A Low

"The LPFM Guidebook" by Stephen Kafka

What Is A Low Power FM Station ?

The Low Power FM (LPFM) radio service was created by the Commission in January 2, 2000. LPFM stations are authorized for noncommercial educational broadcasting only (no commercial operation) and operate with an effective radiated power (ERP) of 100 watts (0.1 kilowatts) or less, with maximum facilities of 100 watts ERP at 30 meters (100 feet) antenna height above average terrain (HAAT).  The approximate service range of a 100 watt LPFM station is 5.6 kilometers (3.5 miles radius).  A construction permit is required before an LPFM station can be constructed or operated.  List of LPFM stations :  http://lpfmdatabase.weebly.com  and  https://lpfm.us 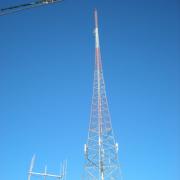 NOW THAT YOUR GROUP, CHURCH, OR SCHOOL WANT TO BUILD, OR HAVE APPLIED FOR A LOW POWER FM, DO YOU KNOW HOW TO BUILD IT FOR LESS THAN $5,000, WITH NEW EQUIPMENT ?

AND, HAVE IT COVER ITS OWN EXPENSES, RIGHT AWAY, AND EASILY PAY FOR ITSELF IN LESS THAN 1 YEAR ?

AND, GIVE YOUR STATION MANAGER/DIRECTOR A YEARLY SALARY TO LIVE ON ?

-A complete copy of all FCC rules, regarding LPFM.

-How to file yourself. Finding the right transmitter site, etc.

-A guide to revenue producing programming, to make  your station self-sufficient.

-A list of equipment suppliers, and costs for necessary equipment.

-A listing of all the licensing fees you'll have to pay on a yearly basis, to stay legal.

-Learn how to operate your station unattended.

-How remote broadcasts can be a goldmine for a LPFM.

-How independent programmers can greatly benefit your station.

-How to get a volunteer worker program established.

-What you need to know about the Emergency Alert System.  What equipment to buy,  studio to transmitter links, and much more.

THIS eBOOK WILL PAY FOR ITSELF REPEATEDLY !!!!!!

"Thanks Steve, it has already helped, the antenna length will be 80 foot, if City ordinances don't let me its nice to know I can go 60 foot with or without there permission, thank you so much, I really needed this book, and I have not had the time to read it from page to page yet I just skimmed through it, I love it
my only hold up now is my registration to the AFF, then I believe I will get my construction permit, i am a singleton and that great !"
Bill

"Steve, Thank you so much! I appreciate your helping us." Sincerely,
Jo

"Thanks so much for the book--it is already filling our radio station crew with tons of ideas. Guaranteed to pay for itself many times over!"

Stephen,
I purchased your book...great stuff!

-Over 250 copies of this eBook have been sold to LPFM applicants and new licensees, as of 12/2018. Including churches, schools, colleges and universities, state and local government entities and other groups.

To purchase this eBook, (16MB PDF) with "instant download"

secured by Paypal, click the "Buy Now" button below:

We now have our own MOBI (Kindle) version of this eBook for sale.

You get both the MOBI, and a complimentary PDF copy to download.

Please click the "Buy Now" button below, for the MOBI & PDF versions for $40,

An ePub version is now available also, with a complementary

PDF copy for $40, secured by Paypal, with "instant download"

We now have an "abridged" version of the eBook. It is

"How To Start A Low Power FM Radio Station" (Abridged)

It does NOT contain a copy of all the FCC rules, application

forms used in an older filing, or other items like a copy of

You will receive the option to download a PDF, and a ePub

or MOBI (Kindle), for $30. "Instant download" from Payloadz will

This eBook, in english and spanish, is available on MOBI (Kindle)
from Amazon, and in english, ePub, from Smashwords.

"How To Start A Low Power FM Radio Station" (Abridged) is

When you go "on the air", the best and worst of the

town will come knocking on your door !

Thought I should get a mask. They have several at good prices, delivered USPS from US dealers, on eBay.